HONORING THE MOST INFLUENTIAL MEN & WOMEN IN UK GLOBAL RELATIONS

In any society the presence of highly successful people able to create and exercise a wealth of power and influence is a fundamental necessity. These individuals are leaders, able to steer opinion and action towards the most positive possible outcomes in economic, social or cultural contexts. They are the people who, either through position or personality, exercise a significant power that influences events and sets parameters in the conduct of their organisation, the climate of political debate and the shaping of new ideas.

With significant economic and political changes taking place across the world these uncertain times mean finding new ways of promoting Britain on the world stage and defining the manner in which we are viewed by the international community.

The only way Britain will promote itself as a great trading partner and inward investment destination is by profiling Britain’s highest achieving men and women and the companies they work for, in a language and manner which can be understood by all.

Power 100 will show how Britain’s global Ambassadors hold the key, in part, to unlocking a prosperous, culturally diverse and economically stable Britain which can compete with the best of our global partners.

It has long been known and appreciated that many of our leading men, women and companies contribute positively and often powerfully within all sectors of British life. However, through our involvement in the The Power 100 initiative, we have been exposed, on a daily basis, to an almost inexhaustible unveiling of the identities of genuine Power Brokers & Influencers across all sectors including business, education, politics, healthcare and manufacturing to name but a few.

It is important to bear in mind that, when we honour each Power 100 Powerbroker, we are honouring the best that Britain has to offer globally.

ABOUT THE POWER 100 LISTS

Power 100 is the research and analytical arm of The British Publishing Company.

The British Publishing Company has created a network of the UK’s top-performing companies and individuals through its annual Power 100 rankings. It currently publishes thirty annual Power100 Parliamentary Report league tables as well as undertaking our series of PowerTalks conferences featuring the most innovative and influential speakers within their sectors.

Participation within each Power 100 is based on a number of criteria. Those invited to be included within a Power list are primarily people who, either through position or personality exercise a significant power that influences events and sets parameters in the conduct of their organisation, the climate of political debate and the shaping of new ideas.

The 100 names are promoted extensively and included in the Power 100 Parliamentary Review which is distributed to all Members of Parliament, the House of Lords and Key business and Corporate influencers on a regional, national and international level.

Over 3000 key influencers and power brokers have attended our invitation-only dinners and awards events, including our annual flagship Power 100 event which takes place in London and davos each year. 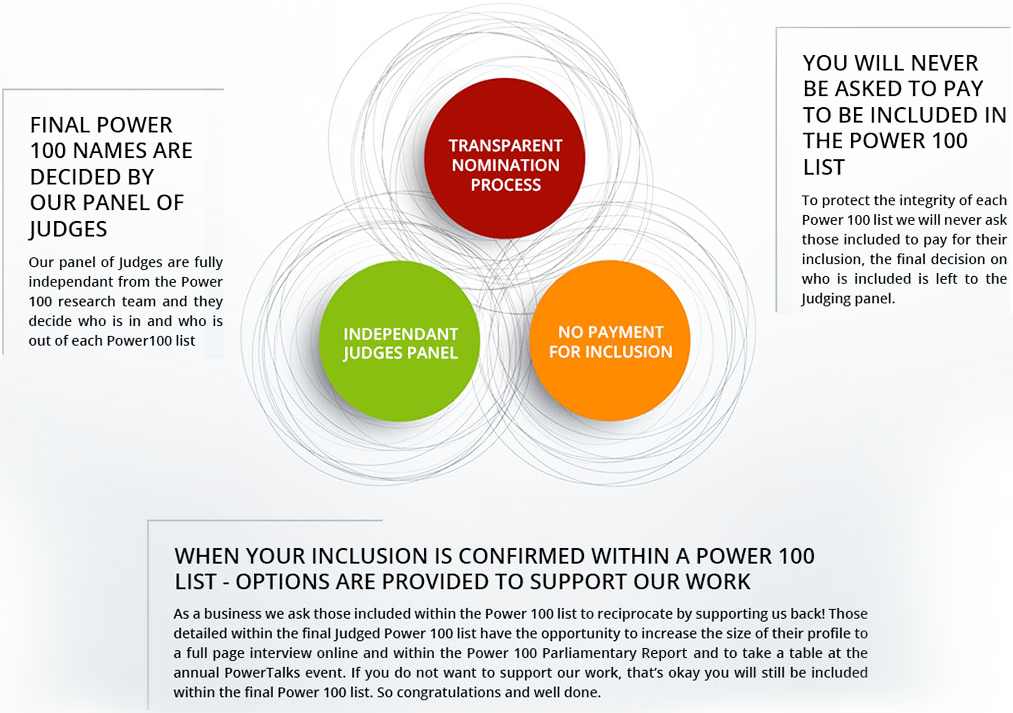 NOMINATE SOMEONE FOR THE POWER 100

In the context of huge political and economic change, The British Publishing Company has launched the Power 100 Parliamentary Report, an independent but authoritative series of publications combining in depth research and analysis by those men & women who exercise a significant power within their sector.

Each publication will promote, in detail, the Power 100 names and the organisations they work for, demonstrating how sector leaders have responded to challenges and opportunities on a national and international level.

It is envisioned that members of Parliament, government, public sector and business leaders will turn to those Power 100 individuals highlighted within each publication, as leading providers of advice, comment and industry expertise.

Power 100 Parliamentary Report has several editions, each focusing on an individual sector with the strategic aim of raising standards by highlighting only those men & women in the Power 100 list who have adopted best practice and provided a benchmark for the rest of the UK to follow. These are the Power 100

Inviting the best and brightest to come & give the greatest talk of their lives.

After the launch of each Power 100 list and the publication of the Power 100 Parliamentary Report we gather the most engaged members of the Power 100 community for sector specific brainstorms, discussions, performances and workshops culminating in an eclectic program of main stage PowerTalks.

Power 100’s extensive programme of PowerTalk’s provide invaluable opportunities for the leading Power Brokers within the UK and Internationally to come together to hear and learn about national and international issues affecting their companies, organisations and communities. Each PowerTalk event is attended by over 1000 guests including the 100 men and women detailed within the Power100 list, 10 of whom are invited to come and give the greatest talk of their lives.

Each of the PowerTalk speakers appear on the main stage to give 15 minute talks and shorter presentations on best practice ideas worth spreading.  After the talks are completed each of these distinguished men and women are awarded the Power 100  Person of the year award.

Our PowerTalk Gala Dinner events, held throughout the UK, are highlights of the business and social calendar. Member companies and their guests listen to high profile guest speakers, while enjoying the finest corporate hospitality, fantastic entertainment and unrivalled networking opportunities.

Many Senior Power Brokers have attended the PowerTalk gala events to not only celebrate being named a Power 100 Power Broker,  but also to meet their peers and to develop and enhance contacts amongst this like minded and exclusive group of individuals.