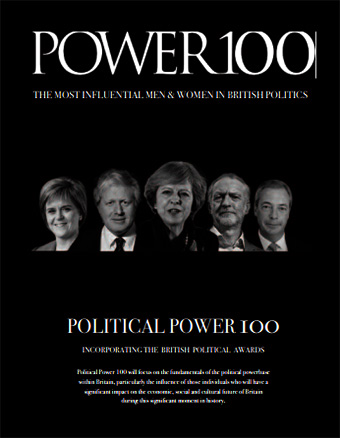 THE WHO’S WHO OF BRITISH & GLOBAL POWERBROKERS

In the context of huge political and economic change, The British Publishing Company has launched the Power 100 Parliamentary Report, an independent but authoritative series of publications combining in depth research and analysis by those men & women who exercise a significant power within their sector.

Each publication will promote, in detail, the Power 100 names and the organisations they work for, demonstrating how sector leaders have responded to challenges and opportunities on a national and international level.

It is envisioned that members of Parliament, government, public sector and business leaders will turn to those Power 100 individuals highlighted within each publication, as leading providers of advice, comment and industry expertise.

Power 100 Parliamentary Report has several editions, each focusing on an individual sector with the strategic aim of raising standards by highlighting only those men & women in the Power 100 list who have adopted best practice and provided a benchmark for the rest of the UK to follow. These are the Power 100